Thinking About Easter – Part 5 – The Shofar 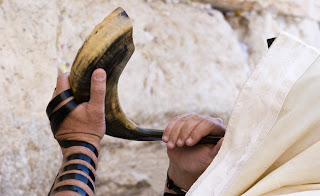 The Shofar is translated "trumpet" in the Scriptures. It played a significant role in bringing men and women into the presence of God.  There are four sounds made with the shofar:

It was used on occasions stipulated by God in the Old Testament. I will list just seven here.

The Shofar Blown - The Lamb is Slain
The day Jesus was crucified was the day of the Passover celebration and the day that the Passover lamb was to be sacrificed.  At 3 pm the priest would go to the "Pinnacle of the Temple" (the highest point). For the previous 1,200 years, the priest would blow the shofar (ram's horn) at 3:00 p.m. - the moment the lamb was sacrificed, and all the people would pause to contemplate the sacrifice for sins on behalf of the people of Israel. At 3:00 pm when Jesus was being crucified, He said, "It is finished"- at the moment that the Passover lamb was sacrificed and the shofar was blown from the Temple.

The Veil of the Temple
At the same time, the veil of the Temple (a three-four-inch thick, several story high cloth that demarked the Holy of Holies) tore from top to bottom - representing a removal of the separation between God and man. During the lifetime of Jesus, the holy temple in Jerusalem was the center of Jewish religious life. The temple was the place where animal sacrifices were carried out and worship according to the Law of Moses was followed faithfully. Hebrews 9:1-9 tells us that in the temple a veil separated the Holy of Holies-the earthly dwelling place of God's presence-from the rest of the temple where men dwelt. This signified that man was separated from God by sin (Isaiah 59:1-2). Only the high priest was permitted to pass beyond this veil once each year (Exodus 30:10; Hebrews 9:7) to enter into God's presence for all of Israel and make atonement for their sins (Leviticus 16).

Solomon's temple was 30 cubits high (1 Kings 6:2), but Herod had increased the height to 40 cubits, according to the writings of Josephus, a first century Jewish historian. There is uncertainty as to the exact measurement of a cubit, but it is safe to assume that this veil was somewhere near 60 feet high. Josephus also tells us that the veil was four inches thick and that horses tied to each side could not pull the veil apart. he book of Exodus teaches that this thick veil was fashioned from blue, purple
and scarlet material and fine twisted linen.

The size and thickness of the veil makes the events occurring at the moment of Jesus' death on the cross so much more momentous. "And when Jesus had cried out again in a loud voice, he gave up his spirit. At that moment the curtain of the temple was torn in two from top to bottom" (Matthew 27:50-51a).


Hebrews 4:16
Let us therefore approach God's throne of grace, with confidence so that we may receive mercy and find grace to help in the time of need.

Isn't is amazing what God has done to put an exclamation point to the importance of the death of His Son! He wanted us to know with the death of the Lamb of God and the ripping of the Veil of the Temple, that now we can all appear before God even as Moses did, face to face. We are being invited by God himself to come "boldly" that is, without fear, to speak with Him face to face.

Isn't is ashame however, that the people of God rarely avail themselves of this high and holy privilege and calling. The Holy of Holies is open, but we are seldom there.

This Easter the Lord is reminding you and me that the way is opened into the Holy of Holies. Why not take advantage of the trumpet call and enter into the presence of God?